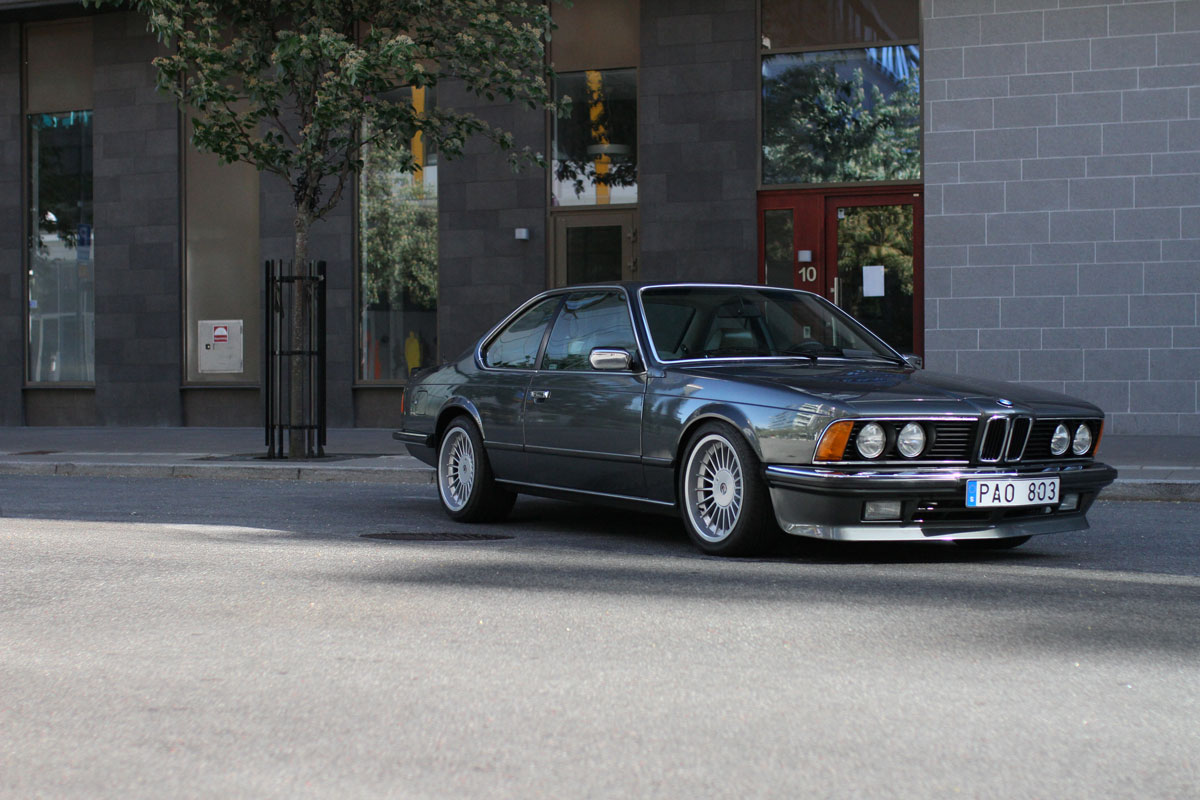 The steering wheel of the BMW 635 CSI from 1986 is steady in my hand while we drive through the suburban areas. The whole car feels just like every article explains, a motorway train. Bumps, holes in the ground and irregularities are swallowed by the soft and robust suspension.

“This was BMW’s response to Mercedes SEC models and Porsche 928 at that time. This one should lie silent on the German highways and take you fast and classy from one place to another ” says Tomas while the sun is making the long hood shines.

It is the day after the Swedes football team had a fight in the Stockholm suburb Solna. The large and wide streets were crowded with 52.000 spectators around the National Arena the night before. Now it’s empty and the sun’s light bounces in the large office windows.

All of a sudden, as on film, I see how the classic forms of a BMW 635 CSi comes rolling at the end of the long street. The car fills the wide street magnificently. The feeling of the 80s falls over me when the reflection of the sun from all the glazed facade surfaces shine up the BMW´s gray paintwork.

Quietly, it rolls toward me and the intro music of the LA Laws series from the late 80’s with the backdrop of the Los Angeles downtown skyscrapers, playes in my head. This majestic highway monster with its leaning nose illuminates success from the Yuppie era.

The production of this generation of 635 was taken back by BMW in 1982 from Karmann, as the quality was not achieved according to BMW. The feeling of quality is radiated and really stretches out when the asphalt is slowly taken meters by meter towards me.

“I have not regret me since then”

Tomas parks right where I want the car, as we chase the last sun reflections on the street. The photo shooting starts at once.

Soon and quickly, Tomas and I start talking about everything that has to do with classic cars, but mainly about this icon that stands before us.

“This one I bought in the spring of 2016 and I have not regret me since then.”

“There was a white 635 in the summer before, which I was so eager to buy. The “need to have” request was so big within me and once I had decided that I would buy one, I just had to get it. Unfortunately or lucky maybe, because the deal on the white did not go through and mow afterwards, it was quite nice. Apparently, the car turned out to be in much less appealing condition than this, ”says Tomas with a direct voice and a smile.

The car’s slim, flexible coupé makes it really look intense and fast. It wants to move forward and it breaths class and beauty.

While photographing on the street, a modern BMW 530 goes by and the 635 looks like a streamlined, thin, well-trained city slicker while the cousin from the country, with all the modern technology and comfort, more look like a bulky little older ox.

Quite quickly, I realize that Tomas’s name on his Instagram account “Stockholm Car Nerd” is really true. He know cars more or less down to the screws and nut level and have an overall view of both the modern and the classic car market.

It is a pleasure to hear him compare, discuss, question and talk about cars.

He also demonstrates precision when he begins to talk about the history of this beautiful car. He have dug and found out how it eventually ended up in his possession.

“It’s so fun to do the detective job around such a classic car. I started to dive deep into the car’s history, which has led me to some interesting people. ”

Tomas points to the parking patch in the front window where it says “The University of Gothenburg Department of Home Learning”.

BMW came to Sweden from Schweiz

“The person who took the car to Sweden is called Ingrid Persson and took the car with her when she moved home to study in Gothenburg. This little parking tag in the box did so that I could track her through LinkedIn to the University of Gothenburg and thus get in touch with her. There are a number of Ingrid Persson in Sweden, can promise you that. ”

The idea was that Ingrid would make a lot of money on the car when she brought it to Sweden but instead drove around with it a couple of years before she sold it.

“Ingrid sold the car to an airline director who owned it for 12 years. A proof of his presence is another sticker that sits in the rear window. “

Airline director sold the 635 to “safe” it for the future

Tomas points to the Swedish Air Force’s emblem in the rear window. A light blue round sticker with yellow frame and the classic winged propeller with the text Air Force under.

“The company apparently went a little bad and the director decided to sell the car to one of his pilots, in order to” secure “it for the future.”

“I have tried to get in touch with the director, through messages on Facebook. But no answers. The pilot on the other hand, I got hold of. He told us how it went.”

The pilot took care of the car well for quite exactly eight years.

“He changed everything that was needed and didn’t hold back. The car is in top condition after his care.”

When I quite easily get in to the back seat to photograph the interior, I feel how much space there it actually is to move on. Ok, you might not dance in there, but this is still a coupé and then it is usually very little space for a person who is higher than 155 cm.

While I snap picture after picture, Tomas tells me how it happened that he actually wanted one of these.

“Ever since I was 8-9 years old and had a poster on a red BMW 635 CSi on the wall at home, I knew – one day – I should own one like this. The car on the picture skidded on a dirt road which I can now think was a bit strange promotion picture for this car, but but … ”says Tomas with a thoughtful smile.

“Dad was a BMW fan, so the interest in cars and especially BMW I have got from home. It took a while before I jumped on the spin for classic cars, I think myself, but as I said, 2016 I got in to it.”

“Go go!!! You will not regret your self”

“Today, not much money is required to buy a classic car. Check out Ebay, Craigslist or/and the Internet. There are many good cars for 2000-3000 dollars which can be a first step into the classic car world.” Tomas continues.

“Would recommend to anyone standing and weighing between doing and not doing. GO GO! You will not regret it. In the past few years I have met friends for life, because of my, or our, common car interest.”

Tomas have now “tasted the classic car blood” and in the garage he also have a 1990 BMW 320i Cab.

“Also had a big craving of a Jaguar as a family car with a high chair and everything, so in the spring I bought an XJ8 3.2. Unfortunately, it was perhaps not really what I wanted, so it had to let it go to another happy owner. Fun to tried though.”

Over the years, a manual BMW 850 Ci has also passed Tomas’s garage.

Even in the 635 CSi it is a patented compartment scent

From the almost unused rear seat it strikes me that the interior is spartan. Even when the car is one of the high-end cars of the 80’s, the interior is really slim. It’s no much of a fluffy distraction. It is very beautiful, stripped and clean. Almost calm.

“Even this car has the patented classic car compartment scent. A mixture of moisture, exhaust, and leather.”

When Tomas points it out, I laugh, because he is quite right. All classic cars have almost the same cabin fragrance, which gives a car person a little bit of ease and calm.

The Motorola in the BMW makes you smile

The only thing Tomas has done on this car is to replace the entire cooling system and refurbish the AC. Otherwise, it’s small things and services that have made it go as nice and quiet as it goes.

To frame the car’s history, Tomas’s friend bought a contemporary Motorola mobile phone for him which lies in the center console. It was the hottest gadget of that time. Today, it creates more smiles and memories, rather than phone calls.

It strikes me that Tomas is a caring person who is passionate about his car interest and life in general. We discuss everything from modern marketing, the automotive industry to classic cars and family vacations.

Before we split, Tomas take me in to drive the car, which of course I want to do.

It never feels natural to sit in an icon car, to drive, when the owner is sitting next to you.

Engine starts at once and the straight six, purrs comfortably when I press the accelerator. It sounds like all 218 horsepower is home in the stable. Put Drive in and the BMW 635 CSi sneaks away like a dream. My head screams “Wooow” and again I sit with a big smile on my lips.

BMW 635 CSi is about to get globally scrapped out

The delicious 17 ”Alpina rims spin nicely in the shop display windows when we slowly drift away from the parking lot.

I get the feeling that The whole car wants to stretch its springs and cylinders on a four-lane highway between Frankfurt and Stuttgart. The whole car feels like Lightning McQueen’s mantra: “I’m speed”.

When we cruise through the suburban business park, Tomas says:

“It has been shown that it is a frighteningly large proportion of these cars being scrapped from the market globally. Probably you buy a car to have spare parts for another and then scrap it or that the car is scrapped at once. There were still quite a few of the cars that got the rusty sickness. “

The six want to show what it can do

Pressing the throttle, on a straight line, and I feel how the car really just wants to show its right side. Just like the bullfighter, in Disney’s movie Ferdinand, who wants to show how good he is at his job, it feels like all the BMW’s parts of the machinery want to show me how good they can push on.

Unfortunately, both the straight line and the Sunday’s meeting is not enough to drive longer and more fun stretches with this highway locomotive. I hope I get the chance soon to drink coffee, whine cars and pat on the 635’s fine M-steering wheel.

Thank you Tomas for an incredibly rewarding, fun and good meet. 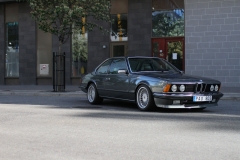 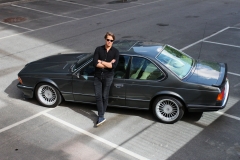 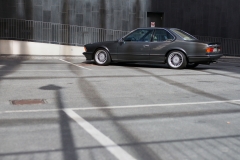 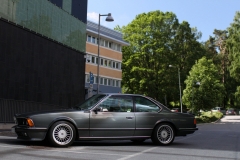 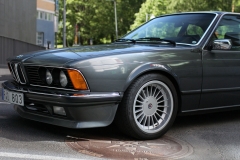 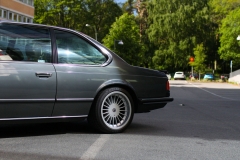 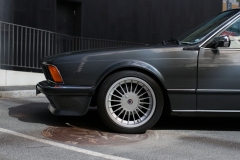 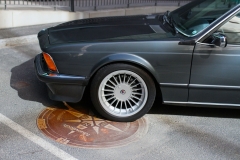 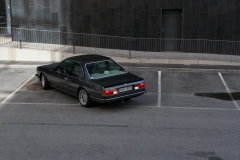 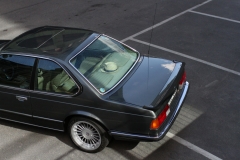 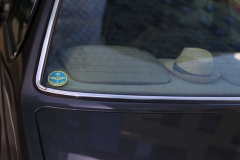 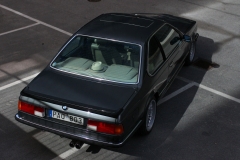 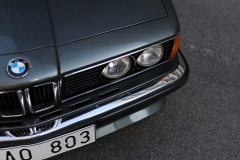 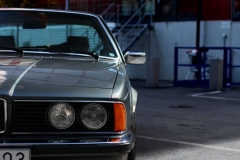 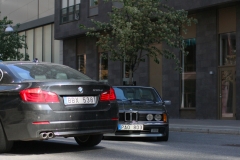 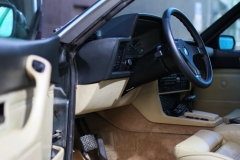 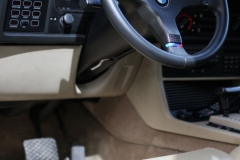 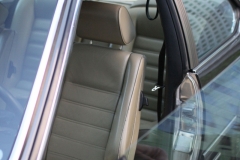 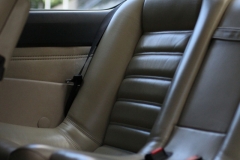 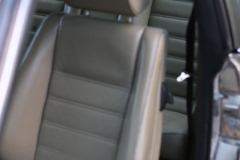 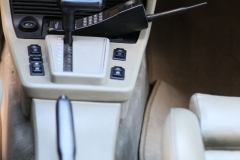 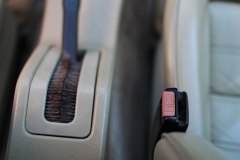 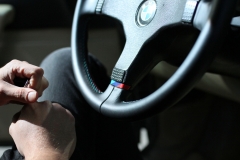 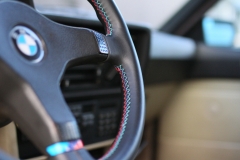 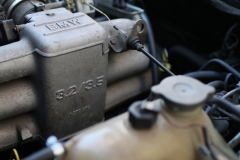