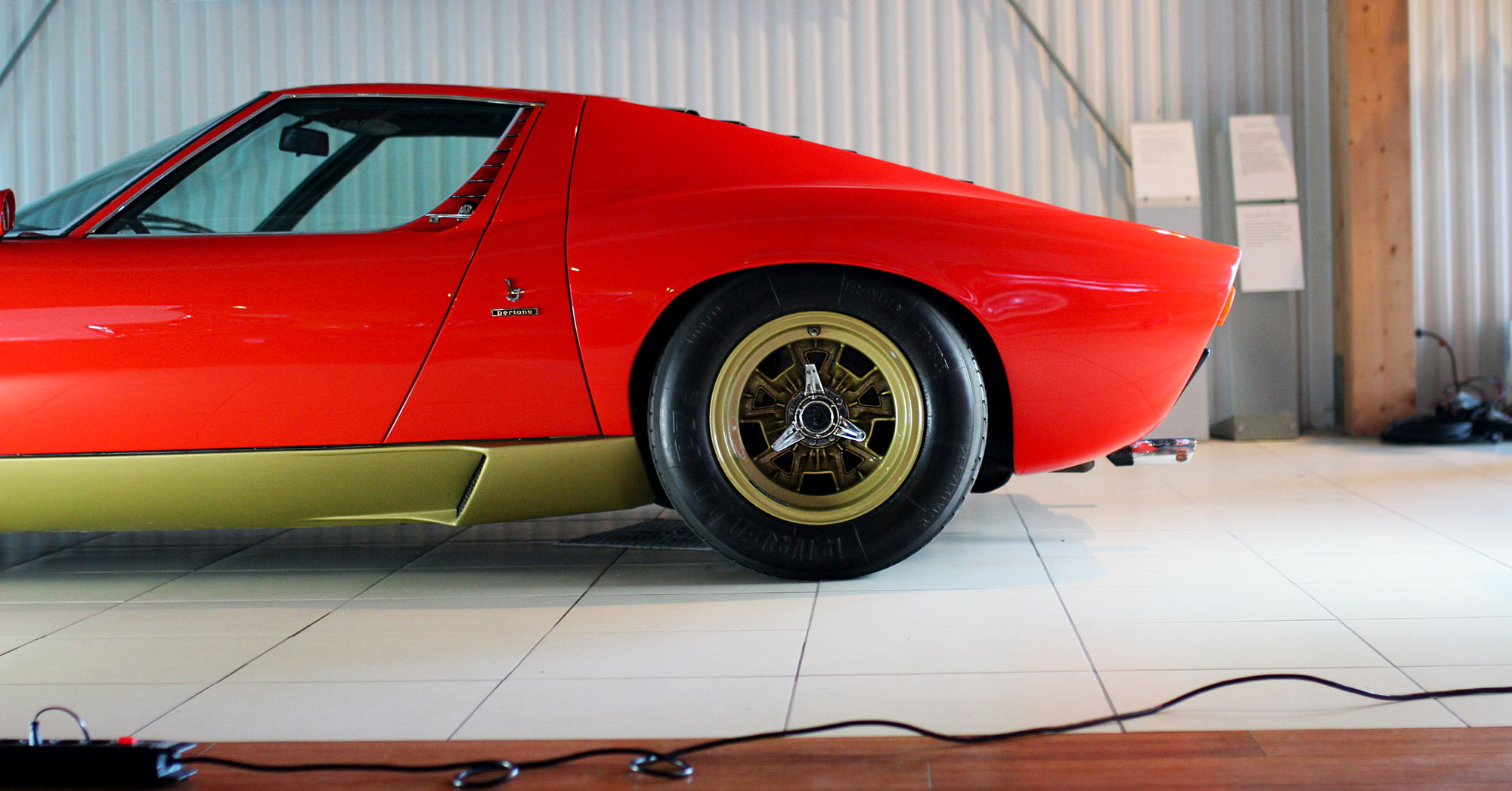 Ping! The note on the phone conveyed that the long-awaited message had landed in my Instagram inbox.

“I am in Katrineholm at 12 o’clock. Moving cars. See you there.”

Looking at the clock, realize that it takes me exactly two hours to come down from Stockholm to Katrineholm.

Packs the camera, takes the bag with light on the shoulder, a cup of coffee in thermos and jogs down to the car.

After 30 minutes, at Södertälje, I try to create a picture of what I might see when I arrive. I know that the collection I am about to visit contains at least one Lamborghini. Specifically, an orange Jarama that is a tribute build for the legendary Lamborghini test driver Bob Wallace.

Bob helped during his years at Lamborghini, 1963 – 1974, among other things, to produce two of the most classic cars in the world – Lamborghini Miura and Lamborghini Countach.

To put his needle even harder on the historic car map, Bob set speed records for production cars in 1967 with a Miura P400. Ferrari, however, beat the record already in 1968 with a Daytona 365 with some few more kilometers an hour, to 280 km/h.

Bob had the world record in 13 years

Bob kept the record for 13 years before the younger brother of the Miura, Lamborghini Countach LP500S scooped it in 1982 with another 5 km/h, to the hefty 293 km/h!

The orange tribute Jarama I had met a few times before this trip to Katrineholm, most recently it stood and glittered this spring at Gärdesloppet in Stockholm.

I had found the owner through his Instagram account and I hold my thumbs up that he still have one or two of the other Lambos that I had seen in his Instagram feed. But even if I was only going to get Jarama in a picture, it would be okay for me. It is so beautiful.

The clock just ticks over until 11.59 when I park the car outside a blue sheet metal building in Katrineholm. Through one window the butt of the orange Jaramaran lights up and in the second window stands a small white aggressive sponsor texted Metro 6R4. I had come to the right place.

Knocking on the door and Timo, the owner of the Instagram account and the cars, opens the door. We shake hands and I get in.

In front of me, suddenly a football pitch big room with lots of four-wheeled artwork is opened.

Right inside the door is the orange Jarama as an enlightening, freshly polished toy car. I can’t handle it but it is so beautiful and it really catches my eye every time I see it. It catches me so much that I almost miss the red, silky, one meter high Miura with gold rims standing in front of it. I almost snatch that I didn’t see it standing there. What a piece of art!

Do not really know where to start looking, because the room holds so many cars. In front of the Miuran, the white little etched Metro 6R4 stands and of that beside it a unique yellow Cord 810 with its long nose and thick short butt. At the bottom of the corner is a black curly Rambo Lambo LM002 and in front of it stands two Continental cab´s from 1958.

The car brain is burning and the car soul is completely taken over what room I ended up in. I feel that the artery on my neck beats harder than normal when I stand in this Lamborghini Cocktail.

I lift my eyes and look further into the room. Boom! There is a white Countach, a gray Murcielago, a devil’s black Diablo, and a whole lot of other cars that just disappear in the shadows of these three Italian beasts.

I hear how Timo explains, points and talks enthusiastically about the different cars. However, the brain has been freezing of all shapes, rims and phenomenon cars. I had stepped into an Italian smorgasbord with scattered bursts of American muffins and an explosive little British hard-shelled jelly in one corner.

“This Mucielagon was the first Super Veloche to ever drive out of the factory. In this, all journalists have been given test rides and test drives. The proof of that is on the plate between the chairs. “

While I lean over the well-scaled passenger seat to see the evidence that this particular one is number one, I ask:

“So, how do you get your hands on a car like this?”

I replied, “Well,” as if it were like buying one liter of milk from the merchant. For a man like Timo who has such a collection of cars, nothing seems impossible.

Lamborghini Diablo on the carrier

After a short coffee break and chat, I feel that Timo wants to start moving his beautiful treasures along with his two friends. They will change premises soon and I get a brief explanation that they will build a more solid place in Katrineholm that will function as a meeting place and where the cars should be able to stand on display. The case seems to be with the county at the moment.

Together we all roll out the Diablon of the garage so that it will take place on the carrier. The Diablon is so black in the garage that I have problems to really see the shapes of it. But when it comes out in the daylight, then you can see every angle.

Soon after, Timo starts the Lamborghini Murcielago and it echoes throughout the room when the Italian pistons twist and turns inside the cylinders. The sound of the V12 is striking and rap. Slowly he backs out and the hair on my arms stands up.

“We´re back in 30 minutes. Please close the garage door when we have left, so you can photogrape in peace and quiet, ” Timo tells me.

Someone screamed inside my head; Huh, What?!

“Of course.”, I answer, while my body shakes of joy inside.

I see how the cars disappear up the crest outside the garage. Timo put a pressure on the Lambo on the straight. The 700 horses sings and sounds throughout the entirely industrial area when the car quickly disappears. The sound remains in my ears while I slowly go back over the parking lot towards the open garage door.

My smile is big like a banana. When I press the button to close the garage door, I hear how Timo has found another straight line on his way out of Katrineholm. I can hear that he is pushing the rev meter on the Italian ox.

Alone with the Lamborghini Countach LP400S

Can’t really understand that it’s true, but all of a sudden I’ve been left alone with perhaps the coolest collection of cars in Sweden.

I walk into the garage and stare straight at the white Countache, which now looks a bit lonely without its two younger brothers.

I have read millions of text lines on the internet about this car, but there and then I had forgotten everything. Quietly, I look at the arrow-shaped front that looks to make 150 km/h of just standing there.

Even if you were born in the 21st century or 1930 you should really understand the greatness of this car. Just look at it. It is like a wedge-shaped warfighter plan, with the mission of  pushing itself through the arriving air at maximum speed.

It is not made to crawl on the streets in the city in 50 kilometers per hour, it should travel from coast to coast, in any country, as fast as possible.

It should really stretch every little connecting rod and make the spark plugs smack with their little flashes. The speed should tell everyone around that these twelve cylinders from northern Italy are not to play with.

It will cleave air atoms as it pushes itself down the road at 200 km/h on the broad highways of the United States or roar at a downshift and overrun on the winding roads of the Alps, when the top of the mountain is to be defeated.

I crawl in, close the door and sit fixed in the driver’s seat. The cockpit feels pretty new but is over 40 years old. Here in the Countache, Timo has sat when he dusted the roads of the Gumball 3000 competition diligently.

The blue mocha interior could probably tell a bunch of stories about what have happened with this car. Stories of all kind over the years since the car left the factory.

The steering wheel feels perfectly in the hand and it is difficult not to press the buttons or knobs in the car.

The Countach on the carrier

I have really hard to understand how they have managed to get the gearbox, which lies between the two chairs, and the V12 in this massive sports car. This car is a high-level Tetris of the time.

Shovels the scissors door and hears the hydrals working to get the door to the top, fresh air seeps into the cabin again.

Running a smooth, beautiful and credible way out of this car is a challenge. It would be so much easier if a passenger could give me a push in the back. After a bit of shaking, a little sliding and a bit of trixing, I finally stand up with a leg bend’s help.

After to short of a time the garage doors pops up and Timo and his friends are back. It feels I didnt have no time at all to photograph the cars.

We help to push out the magnificent icon car to the carrier. I had wanted to hear the 394 horsepower start and wanted to stay in the garage the whole week out. Timo assured me that there will be more opportunities.

The white unicorn disappears on the carrier over the same hill where Timo previously printed the air with the Murcielago.

What happen to the Jarama?

In the car on the way home to Stockholm, after having socialized with at least hundred cylinders, fantastic shapes and a lot of car history, it strikes me:

The Jarama! Damn, I didn’t spend more than two minutes with it, before all the other Italian sirens started singing for me and I was seduced.

Hmmm, I leave it for next time when I visit the Lamborghini Cocktail.

Thank you Timo for letting me hang around with your precious rarities.

Do you wanna follow Timo and his great collection of Lamborghini´s and his motorish life? Tune in Timo on Instagram. TimoHelisten59 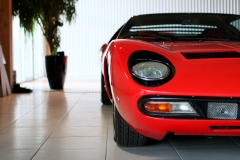 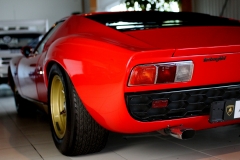 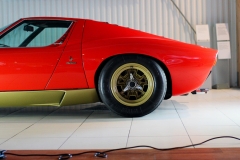 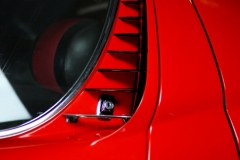 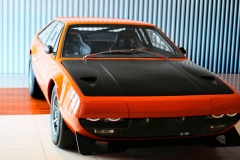 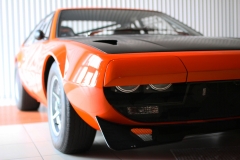 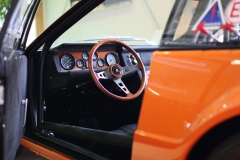 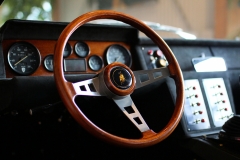 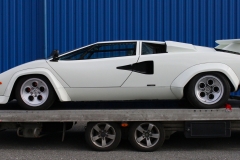 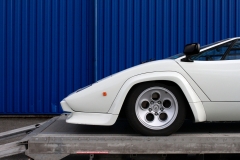 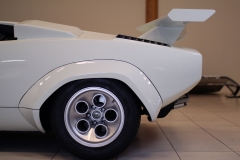 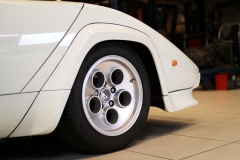 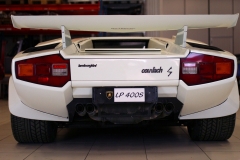 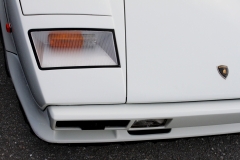 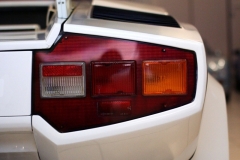 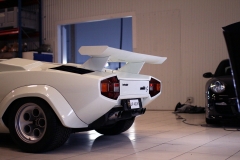 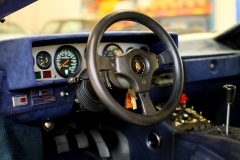 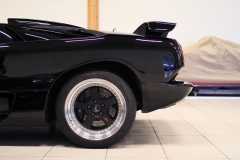 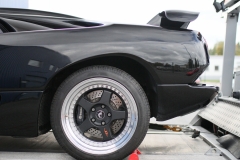 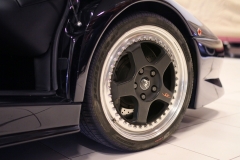 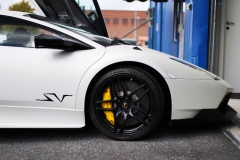 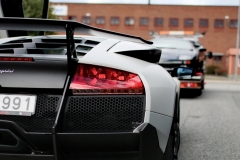 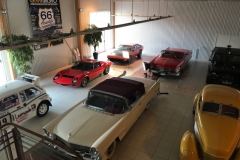