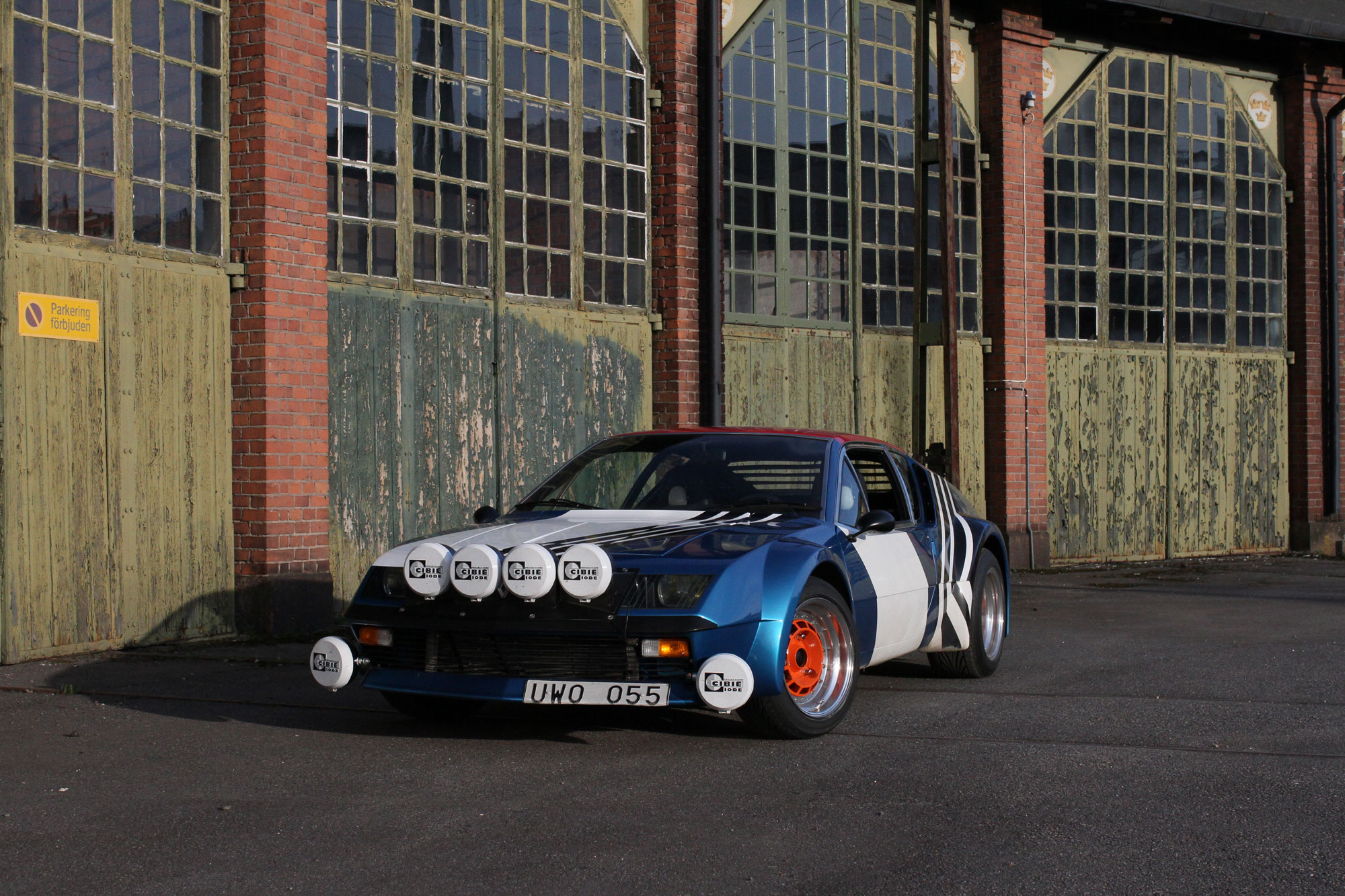 After the summer season 2009 Johan put his Renault Alpine A310 in the garage for the winter. The decision matured while the leaves were falling and later when the spring were starting to crack up, eight years of renovation began.

Two persistent souls refused to give up, so in a barn in Katrineholm, Sweden, a French jewel grew, to be a rolling work of art on our streets.

Johan have always dreamed of a Renault Alpine A310 ever since he played the card game SuperTrumf from when he was little. The car became a permanent memory from the childhood even then the Alpine very rarely overtook any other car in the game. Although the forms were appealing and the absence of the car on Swedish roads made Johan hold on to his dream.

Test drived on the island the whole day

In 2007, the day came when the A310 was bought by the board member of the Swedish Renault Club, Peter Bergqvist. On the island Gotland the Renault was tested a whole day to finally be shipped to the mainland.

Almost immediately, Johan knew that the car might not be the dream car he had intended. It didn’t really behave as he wanted. It was a little wacky and messy on the roads.

Johan’s head began to spin at once about things that were not really what he had imagined and how he would get it better and more good looking.

“Just needed to be painted”

Two seasons Johan went around in his, dark blue almost purple, A310: a. Before the winter of 2009, he put it in the garage and after that the eight year renovation began.

When the renovation started with Jörgen Stendahl, it quickly became apparent that the car had quite obvious flaws.

“Both Jörgen and I thought that the car just needed to be painted a little, but that was not the case.”

On the left side, the car had at some time previously been crashed and that the basic construction was over all very rotten.

The A310 construction was rotten

“The plastic body is actually self-supporting, but a few pipes protrude from the central pipe frame under the floor. One of the steel tubes was gone inside the glass fiber. The ends of the tube were not closed so the steel pipes have been exposed to water, air and circumstances for almost 40 years. The construction was almost completely rusted and destroyed. “

In addition to the pipes, there are fourteen plates in strategic places under the car that hold the body on to the frame. Those fourteen were down for counting as well.

The bodywork, once the paint was milled away, was like a bubbly alpine landscape. The more Johan and Jörgen grinded, the more shortcomings it emerged. There were repairs, pits and moisture damage throughout the body.

They realized that the trunk lid was a lost case and needed to be replaced straight away.

The whole front of the Renault needed to be swooped

During one of the winters, uncured fiberglass dampened through the filler in the body. It had become so damaged that Jörgen and Johan made the decision to cut the front of the body. In the middle of the front wheelhouse, the body was cut straight off, to make room for a completely new front.

Johan is trying to show me this when we are photographing the car.

“Now that the paint has started to sink into the body and sit, something like that starts to appear in the contours.”

I didn’t really see the cormorant, even due I was looking really close. Though this is exactly what made this magnificent Renault so elaborate. Johan and his detailed mindset. The lowest level of this perfect renovation is higher than the Eiffel Tower. When we start talk about it, Johan is mentioning Jörgen direct and giving him all the credit.

“It was he who put the quality level on this renovation. Without him, it had never been so beautiful. It had to take the time it took. Jörgen thought, as I said before, that it would just be to paint a little, but, it took a little longer time and more work than that. “

“I have a lot to thank Jörgen for.”

Most sold items on Fascinating Cars

“After that I just had to wait.”

The more we talk, I understand that Johan has probably drawn his straw to the stack. Because there was nothing that Johan couldn’t or didn’t know when it came to history about this fascinating Renault Alpine A310.

The level of detail and the excavation of knowledge and the frenetic perseverance from Johan have created this rolling artwork.

A good example is the side windows. Sure, it is awesome with plexiglass windows with rally gap? Maybe not as durable and neat in the long run though.

For 2 years, Johan explores, searches, scans and chases someone who, based on a picture he found online, can build an inside of the doors, where it is possible to mount a window crank.

“Got a man in Marseille. He could not speak a word of English and letters a mail-adress to me. Based on that, I wrote him a mail what I needed and the answer was more or less an account number. I put the amount of money in, that he was asking for. “

“After that I just had to wait.” Johan says with a big smile.

When I later open the door, there are really a neat inner sides with a window crank there.

The body was ready in three years

“Partly because the body needed to sit, but also because the strength after hundreds of hours of work, costs.”

Once the body and frame were to be assembled together, Jörgen and Johan came on the phenomenal idea of ​​putting the body up and down in a cradle. In order to get better access when the frame would be fiberglassed together with the body.

“Slightly easier to put fiberglass standing than to lie under and crawl.”

In the summer of 2017, all the abrasive was finally finished and the car would get its Alpine blue lacquer and its classic decals.

Once again, Johan shows his mind for details.

“After Renault bought Alpine in 1973, Alpine didn’t really have any official colors until 1975. Alpine ran with light blue color like mine. Otherwise, Renaults always ran with yellow / black / white.

Before it was decided that Alpine would compete under the official Renault colors, from 1973 to 1974, a A110 and an A310 competed with these particular colors. “My car” drove Ronde Cévenole in 1974 for example. “Johan says while we are getting ready to move and drive off.

The engine is making the air swell

When Johan turns the key the unburned gasoline is spewed out of the funnels. My body shakes when the high and beautiful engine noise causes the birds in the tree to fly away. The sound causes the air to swell and vibrate slowly. I am thrown back to the depot in any of the classic races I have been on, as I feel the ground slowly moving when the A310 starts rolling away a couple of meters.

I crawl in to the passenger seat to get to the Hamburger place or dinner.  Johan gives me the classic rally headphones that I put on, though I quickly poke them away to hear the engine’s desire to push the car faster forward.

Over dinner, which is eaten in Linköping’s most cozy sports car garage, Johan answers the question of how he could cope with the renovation.

“Have heard that dead things should not win over you,” he says smiling between the bites.

When we get back to the parking lot, the classic question comes up. Johan answers without blinking: “Of course you should!”

Immediately I get a small lump in my stomach when I get the keys in my hand.

Trying to start the Alpine with the wrong key

After receiving instructions and trying to force the wrong key into the ignition lock, the engine starts immediately. The V6’s rumble causes my adrenaline to rush into the next level.

Immediately I feel how easy it is to maneuver and it is like sitting in a go-cart with bodywork.

On the first straight I dare to push a little but I can feel is so much left in this compact engine.

When I begin to take the curves to our final destination, the G force in the head is the only proof that the car is turning. It is flat on the road and even when I press at the end of the roundabout, no uneasy movement feels at any level. The A310 just wants to move forward. Front tires follow the steering wheel movement in a millisecond, it’s precise.

Gear lever positions are not completely numb, but it is wonderful to feel the short journey of it from the second to the third and back to the second.

As soon as I lift the gas and / or gear down, it’s a consistent blare out of the straight exhaust pipes.

The A310 is starting to take place on the dream list

Everything with this car is appealing. It’s the most balanced and fun car I’ve driven in my entire life and I think Renault Alpine A310 has started to penetrate my dream car list as well.

Johan, my soul get´s happy when I think about what you and Jörgen have been able to endure during the eight years of renovation. To create this amazing work of art that is now allowed to roll again on our roads.

Thanks for letting me run your old car that has now become one of my favorites.

1. Have an extra enthusiast car in addition to your project so you won’t be impatient.

2. Do not try to make shortcuts. Do things right from the start so you don’t have to do the job twice.

3. Always expect a renovation to be expensive and that it will take lots of time. But do not anticipate in advance how much money it will be, then you will never be able to start.

4. Ask for help. Look for professionals in the area or let someone with insight lead you in the right direction. Sometimes you just get blind and get stuck on details.

5. Pester yourself, at the right pace. Some steps will only be difficult and hard. Pause if it feels too boring or frustrating and try to find the enthusiasm again. The whole satisfaction will come in the end when everything is finished.

On Johan´s Instagram account you can follow the Alpines future and also see what happend during the renovation. Of course, if you just wanna say hey, ask questions or just watch good pictures, you click the picture below

Jörgen seem to always have a project going on. Click in to his Instagram to see what is going on and to see some great renovation pictures of the Alpine.