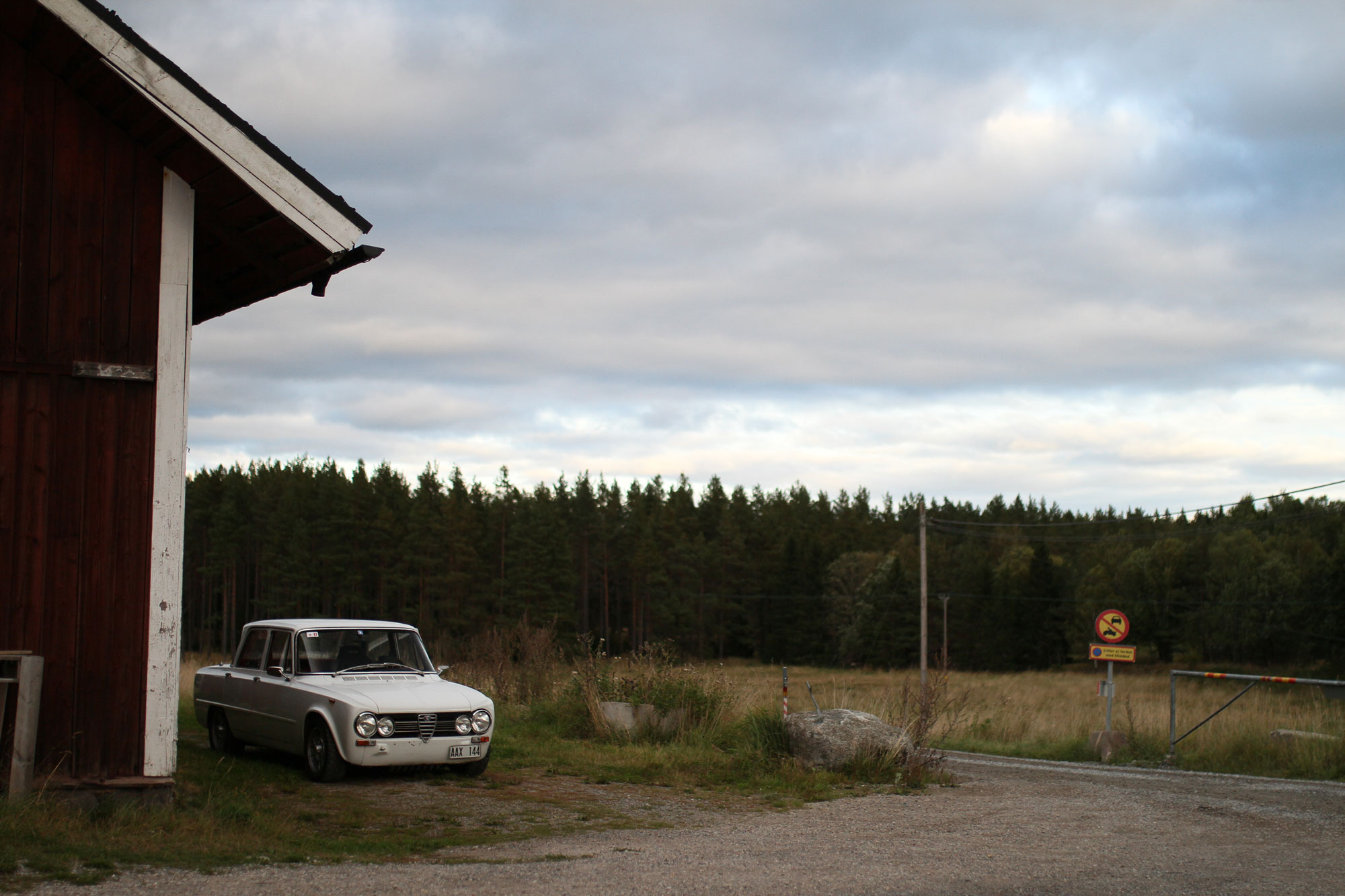 The outside world is disappearing at a fast pace. Tree after tree, fields, gate poles, gravel roads, postboxes and cow fences swoosh by.

A tight and fast right corner is getting closer. Niklas brakes, down shifts, engine brakes and then presses the throttle again. The 51-year-old Alfa Romeo Giulia 1300 TI launches into the next straight.

“The 2nd, 3rd and 4th gear grinds a bit – but at high revs you don’t hear that.” says Niklas about this lively half-century old car, with a wide smile on his face.

The four-cylinder engine is running at high revs and the seas of ​​forest and fields change places as we descend down a hill.

Niklas holds on tight to the Momo Model 7 steering wheel with his black driver’s gloves, his gaze focused, and the yellow indication on the steering wheel follows the car’s movement. The road south of Stockholm on which we travel is where he, as he says himself, usually gets out to clear his head.

Giulian won over the Bertone

The feeling is that he has a long experience of driving a car this way. His driving technique in the curves is knifesharp and monotonously accurate. The engine keeps working evenly between brakes, engine brakes and the throttle.

But the truth is that he only owned a vintage car for two years, and it wasn’t until after he got one that he started cutting the apex of the curves with finesse.

“I believe I was quite mature in my decision to get my classic car. I waited until I had built my own garage that was ready for a car to live in. This was three years ago. That’s when my real search began, for which car would be my first vintage car.”

”It was a lifelong dream that I would fulfil.” Niklas tells me as he shifts into fourth.

Alfa has always been close to Niklas’s heart and before the search began, the dream was always to own the Alfa brother, Bertone Coupe.

“But that changed when I started thinking seriously about buying a classic car. While I was searching Blocket ads (Swedish Craigslist) and going to car meetings, the Giulia grew on me over time, instead of the Bertone.”

The four servo-assisted disc brakes get a light touch when the road bends a few degrees to the left. The scenery outside my passenger window passes by like a rolling postcard.

“The more I thought about the Giulia, the more I fell in love with it. It went to the extent that I would rather have the Giulia than the Bertone. It’s a bit like swearing in Alfista Church, but just to add to the story, the 105 platform is for me the last model of Alfa of which I really like the design.”

What is Pace Car called in Italian?

“On top of this, I also wanted some performance and driving pleasure – and it definitely should not be a two-seater, because I have two very car-interested sons. So the Giulia 4-door saloon suited me perfectly.“

The asphalt goes over a hill and then disappears down a hidden left turn. The black, completely shiny gear knob is chopped down a gear and the engine brakes, but only for a second. Niklas picks up more speed again to take us out of the curve as fast as possible.

The driver’s seat is an original Italian Fusina racing seat of a slightly more modern model. Niklas sits firmly in the bucket seat while I continuously have to work with my stomach, because the original seat on the passenger side, I can assure you, is not intended for fast curves and g-forces.

“I have driven on track three times in my entire life and only with this car. Arlanda Testtrack, Gelleråsen, and at Ring Knutstorp.”

Niklas says that when he went down to Ring Knutstorp, he was commissioned by the Swedish Alfa Club to be the Pace Car for the weekend.

He started looking into the archives and quickly realized that the word “Pace Car” is nowhere to be found in the Italian language. This was confirmed by a good friend of his, down in Italy as well, “No no no, there is no equivalent to Pace Car in Italian.”

Here Niklas needed to be a little creative, so together with Arese Parts from Svalöv he decorated the car with a beautiful longitudinal green stripe with the text “Macchina di sicurezza”, and two seemingly contemporary orange revolving lights on the roof.

“That weekend I must have run at least 60 laps around Knuttorps.”

Decreased several seconds from day one to day two

While we cut meters after meters of the road, the air streams over the beautiful inward-curved front fenders, so that it then disappears over the roof of the cabin and down over the boot. It is rumored that this car has less air resistance (ce value) than Porsches from the same era, and as we are rushing past spruces, birch and aspen, I am not going to argue with that.

Niklas continues “The first day at Knutstorp, my beginner’s driving skills shone through. I was slow and really felt insecure at the track. Although that changed the next day when my good friend from Copenhagen came for a surprise visit. He is a motorcycle instructor and has ridden more than ten thousand laps at Knutstorp. “

“During our laps, he gave me guidelines and tricks that cut second after second off the lap times. The other drivers approached me in the pit afterwards and asked if Iwas a new driver, because they really saw how big of an improvement I made from day one to day two.”

“I was just enjoying that weekend so much and to top it off, Hjuilia (the car is called that) turned 50 the same day I was down there. It was a great humble feeling to conclude those days with her birthday. ”

The driveline is more prominent than the original

The engine spins at around 4,500 rpm when we fly down the sparsely sized two-lane forest road, once made by cows. The asphalt shines from some of the odd sun rays that has found its way through the trees. The needle approaches 5000 before the next curve approaches us quickly.

The previous owner enlisted the help of CC-motors in Eskilstuna, Sweden, to upgrade to a slightly more potent driveline in the car. It is a variant from a crashed Alfa Romeo GTV 2000 with LSD, high compression pistons and more aggressive cams that lift a few millimeters more than the original.

“I myself have removed the airbox and put on trumpets plus switched to a slightly wider  exhaust system to get a better roar at both ends of the system. I also needed to make my own catch tank solution in the engine, for it to be legit on the trackdays.” says Niklas proudly with his left hand in a tight grip on the steering wheel.

The Alfa community is small

The edge of the road is mere centimeters away from the car’s 195/60 Yokohama Advan R-tires which sit on silver-colored 14-inch aluminum rims.

“When I acquired the Giulia, I did not understand how much support the entire Alfa-Community would give. I have not had a single vintage car before this one, so I’ve had to  learn things along the way since I bought her – but problems and challenges have been solved, often together with “support” by countless other Alfistias. ”

The Alfa community may not be the largest but is, according to Niklas, easily the friendliest.

“They are always helpful and you get answers within minutes when you ask questions on the forums.”

Since the community is small, you’re easily  recognized with your car.

The most sold items on Fascinating Cars

“When I was going to buy the Fusina chair, I started talking to the seller and after a while when he understood which car I owned, he exclaimed – Ha ha, I bought this chair from the same guy you bought your car from!”

This car is cool

The front of the car lifts slightly on the crest before Niklas pushes the throttle again, and we push down from the hill that we just ascended. I clearly feel the force pushing my body back in the seat, and I’m amazed at how this 50-year-old girl stays glued to the road.

“My thoughts are constantly revolving around what to do with her. While I like the original style – I do want to make some tasteful modifications. ”

“For me, the stance, style and feeling are incredibly important. I have raised her 20 millimeters in the rear with longer springs, to get a little more comfort, but also to get a cockier look that goes with my taste.”

Both the front and rear bumpers are gone, and the grill with the extra two front lights is not original, but it makes her get a slightly cooler look.

“I remember when we stopped for coffee during a trip a while back. As I stood at a distance looking at the car I got this really satisfying “This is a cool car”-feeling.” says Niklas with a humble smile, while the wind gently whistles in the car’s passenger door.

“Can we do a little bit calmer pace?”

“The previous owner had driven her 4000 km during the ten years that he owned the car, while I have rolled almost 12000 pleasure km’s in 1.5 years. That pretty much sums up how much I like this, right?”

“I am so happy with this journey that I’ve made for myself with Hjuilia. Over the past year, I have met people who I now call my friends. It’s amazing what an old car can do.”

Suddenly the road ends and all that’s left of it is a turning point made of gravel. Niklas turns the car around and I slowly release my firm grip from the door handle.

The three of us take a calming breath while the forest we drove through remains majestic and solid.

My heart rate is high, but my spirit is higher. Niklas smiles as if he has won the Swedish Rally and the engine sounds fantastic under the hood while the gravel releases from the tires and hits the inner wheel arches.

“When we drive back, can we do it at a little bit calmer pace?” I ask cautiously.

Niklas laughs happily, puts the 2nd gear in and it grinds a bit as we  meet the asphalt through the forest again.

The newest items on Fascinating Cars

Do you wanna talk garage builds, Italian cars or electric cars, do not hesitate to talk to Niklas.