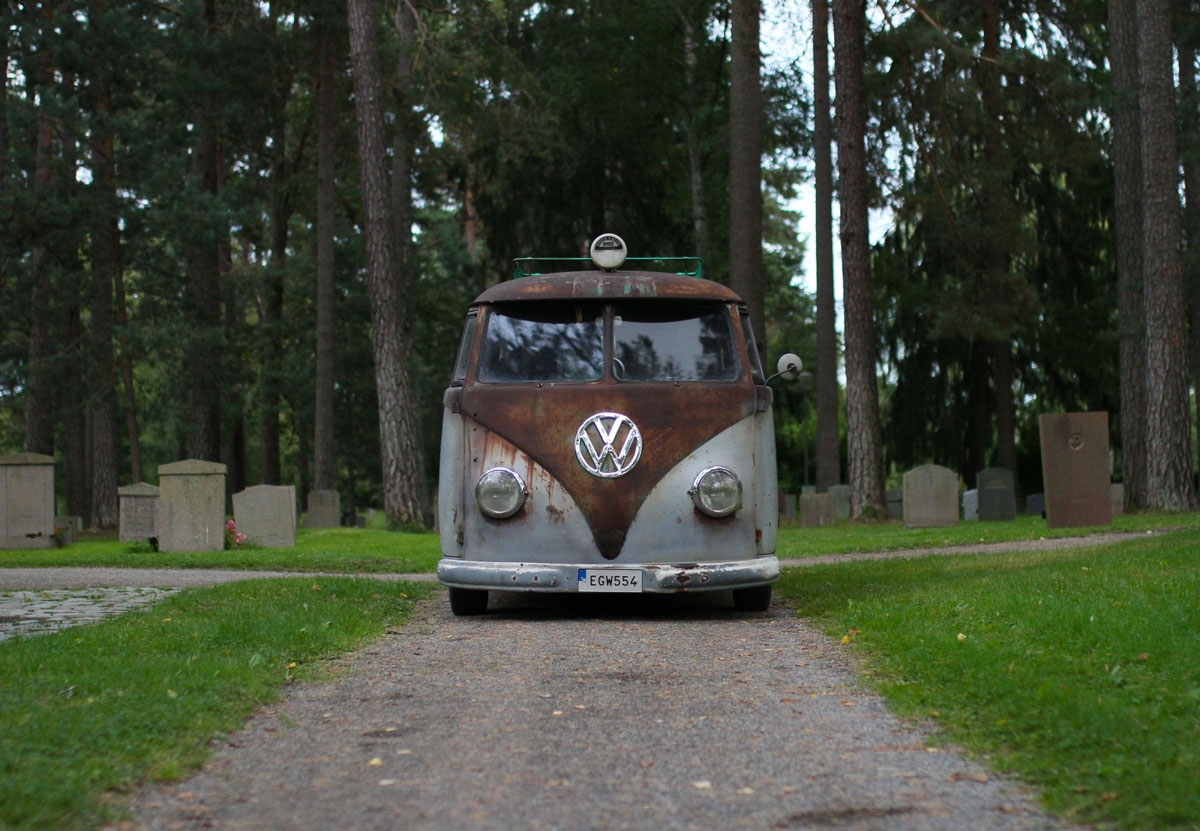 VW Kleinbus from the death

On a overgrown field stood the body of metal just waiting for death. Shrubs, trees and grass were on the way to let the body shift back to nature.

That body’s round roof was rusty and the body’s fine shapes have slowly been decomposed by mother nature’s resources.

It was soon to be a corp and had not seen the road of asphalt since the 70s and a rusty death was almost a fact. Until Micke decided to chop that field up.

The natural patina on the bus is striking. There are rust drips just about where ever you watch. The bus looks almost a bit sad but very tough. It really looks like it survived something and came back stronger in life, stronger than it was when it came from the factory.

“One of those stands on my grounds on Öland (an island in Sweden)  said my customer as he saw my background on the computer screen. Well, I have heard that one before I thought, a number of times,” says Micke, knocking his hands out.

On the screen was Micke’s Porsche green renovated Split Window – Type 2 from 1965, which he, at the time, have had for about 15 years.

“Take a picture next time you are down there and send it to me.” Micke thought.

Time and a few months passed. Then the man stepped into Mickes office again, jolly and happy, with pictures of the rusty relic that stood on his grounds. In the first picture, Micke saw the turn signal arrow in the B-pillar. Then his head started to sparkle.

“Damm is this the gold nugget, I thought to myself.” Micke continues and raising his eyebrows like he has seen something really spectacular.

If you can renovate it, it’s yours, the man said.

The bridge on Öland was about to collapse

A few weeks later, Micke and his friend went down to Öland with a trailer to the overgrown field and in front of him was a rusty Type 2 wreck. It was a Kleinbus from 1957.

“We struggled for hours before we could even see a clear path out of that well-growed field. Can tell you that a number of bushes, trees and plants needed to put their life to on the line when we pulled this bus out.”

” After a while we found out that it was easier for me to pull the trailer into the bus than to try to pull the bus out to the road.”

“The only “little” bump in the road was that it was a ditch we needed to pass to get to the bus. So we built a bridge over it with all the wood we had available. ”

” The bridge collapsed when we later pulled the bus over, so we had to pile it up with stones and whatever we could find around. “

Everything in, on and around the bus was rotten and muggy. 20 cm up on the exterior of the body was totally rusted, two out of four tires were completely rusted to the drums, the tailgate was just crackers and the engine, yes it was gone.

The floor was barely existing but still the only thing holding the whole bus together when it was pulled up on the trailer.

The Kleinbus original mirror was in the mud

The last owner of the bus went by the name of the Pirate. He was the supervisor on the mythical island of the Blue Virgin, by the fairytales a witch island, which lies a little outside the northern promontory of Öland. He was kicked out by his wife in the summertime because he smelled too much fish and therefore had to sleep in the bus on the meadow beside the sea.

“This Pirate was a jack of all trades. He was making money of a lot of things. There are many rumors about him, but the funniest I think is that when he came to sell his flounders, he brought them in an attachment bag.” says Micke with a smile and pretends to show a bag of fish in.

“Pirate’s bed was in the bus when I dug out all the cuttings from it. There was nothing to save. Nature had left its mark in and on it and eaten up just about everything. In all that giggle, which was at least a half-meter up inside the car, I fortunately dug the rearview mirror out. One of those is worth a few hundred dollars today.”

“To little of the Kleinbus was existing”

Micke is still amazed that the car’s roof was not more rusted than it is. The car has been standing by the salted sea for more than 40 years.

“During the 600 km journey up to Stockholm from Öland, I think our load became at least 50 kilos lighter. Things flew from that bus all the way home. Many cars that got behind us, quickly backed off or passed us when they realized that things were flying off the bus.”

Once home, many people probably laughed behind Mike’s back and thought he was crazy. The bus was a wreck and many people thought he just had collected metal scrap.

Micke ignored all the haters and head shakers and saw a huge possibility and opportunity in this old rusty Kleinbus.

Even the Swedish Transport Administration felt that there was too little left of the car to be able to get it registered again.

In that telephone conversation with the authorities, Micke turned the charm on and started to be a little bit personal with the person on the other end. A few weeks later, the car was good for registration, again.

The VW bus taillights have been lent out

“A good friend heard about what bus I had collected and told me that, 18 years before, he had been down by the bus on Öland and“ borrowed ”the round taillights. The taillights are a bit special on the 57´s Kleinbus, it´s the only this year’s model that wear exact those tail lights.”

” If you fix that bus, I´ll promise you I will get you those tail lights back; he wrote to me. ”

Micke has renovated two Split buses as well as some Bay Buses earlier so he is definitely no beginner when it comes to getting them rolling again.

“Can say that I have a skewed attitude. I do like the challenge of getting them together again. ”

At Boxerville.se, Micke quickly created a thread to get the discussions going and get advice and help from bus lovers around in Sweden.

There, you could follow all of Mike’s steps, month by month, sometimes quarter by quarter, from the meadow to the day it was completed.

“At the first round, I ordered 44 kilos of sheet metal that would give me a first step towards repairing the car.”

During the photoshoot, Micke goes through what has been changed or done.

The entire floor has been changed. 20 cm upon the body, is more or less changed around the entire bus. At the right front, in front of the door, all the plate is changed and bent. They cut the luggage door, as the lower part was completely rusted. The brakes all around were just scrapped and is now replaced by new original brakes. The interior is redone. The wheel housings have been replaced.

The list does not stop there but gives a good indication of how much care the bus needed and how much love this bus received.

During the renovation, Micke was struck by how some things just worked for him:

“After 40 years in a field on Öland, you are a bit skeptical to think that things can be solved without little violence and a gas weld. When I unloaded the front wagon, everything floated without force or other means. All the nuts and bolts loosened with only the help of a ratchet.

In December 2015, three years into the renovation Micke puts, for the first time, a battery in the car and to his amazement, the instrumentation and interior lighting lit up. No problem.

In the same period, Micke’s friend comes by and greets him to his great work with the Kleinbus. After a longer conversation, he put the tail lights on the table and says, it´s all yours now. Finlay, they came back.

A couple of days after the meeting the tail lights shines on the bus again.

Everything is now starting to roll on and at the end of 2015 an engine is once again started from the rear of the bus. The spare engine line from Micke’s 65 Type 2, a 1600 engine with straight axle, got in place. After a few attempts, the engines finally starts.

“Two weeks later, the bus rolled a few meters outside the garage on the snow-covered ground, entirely by its own machine. It was a delight to see the old rust bucket move.”

Micke renovated the patinated 1957 Kleinbus for almost 3.5 years. During that time Micke lost the spark sometimes, but he never gave up and did see the end goal all the time.

Today, three years later, the engine has been updated to a 2.3 liter with a Python exhaust system from CSP system with a Straight Axle.

The bus is lowered to the max and while Micke is kicking the gas, so G-force kicks in, he says that there are some problems with the brakes. They don’t really spring back.

It´s a bit uncomfortable to know about it, as we sit in a leafy thin sheet metal bus with hundreds of horsepowers in the butt.

“But this winter I will update to Porsche discs in front. So next season it will be safer to drive. ”

Thanks to a dedicated, methodically-working fan who doesn’t give up, this bus has gone from being a dying scrap-like on the plains of Öland, with one foot in the grave, to attracting incredible attention today, wherever Micke goes.

Welcome back from death.

When the bus comes out of the forrest

When Micke and his friends went down to Öland to fetch the bus, they had the luck to bring a person with a video cam. This is the clip where we can follow the rescue of the Kleinbus from 1957.

Boxerville tread is in Swedish, but it gives you a good indication of what happened when: https://boxerville.se/forum/viewtopic.php?id=12086